Visit www.minchinhamptonndp.com for progress towards our Neighbourhood Plan
Following a consultation in April 2015, a planning application was made for the “erection of five new dwellings and the promotion of an associated Community Orchard” on the Old Vineyard field in Well Hill, Minchinhampton.

An Action Group under the Protect Our Space banner was created to oppose this proposal, on a green field site outside Minchinhampton's development boundary and adjoining the old town's Conservation Area.

More than 240 objections to this scheme were received by Stroud District Council's planners, including objections from Minchinhampton Parish Council, the Campaign for the Protection of Rural England and the Cotswold Conservation Board.  The Action Group also submitted its own group objection, supported by a petition with over 650 signatures collected in the parish.

The application has now been rejected. You can read the rejection notice here.

In October 2017 the field was designated a Key Wildlife Site by Gloucestershire Wildlife Trust because it supports a mosaic of habitats, including species rich limestone grassland, a spring which feeds the species rich Hampton stream and a pond which supports a range of amphibians. Stroud's Local Plan Policy as it stands protects Key Wildlife Sites from development. 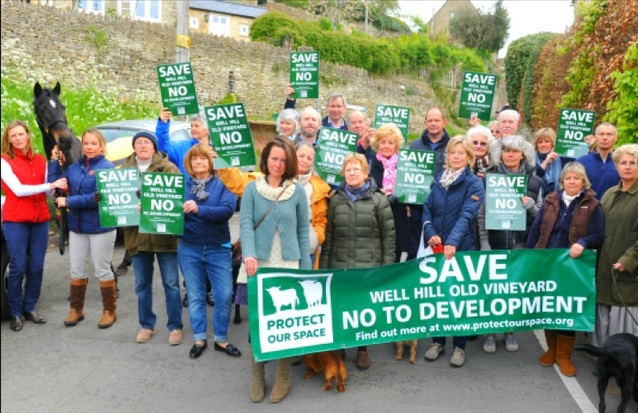