Visit www.minchinhamptonndp.com for progress towards our Neighbourhood Plan

October 2017 - Gloucestershire Wildlife Trust designates the Well Hill Old Vineyard field a Key Wildlife Site, because it supports a mosaic of habitats, including species rich limestone grassland, a spring which feeds the species rich Hampton stream and a pond which supports a range of amphibians. Stroud's Local Plan Policy as it stands protects Key Wildlife Sites from development.

December 19th 2015 - Stroud Life and Stroud News and Journal coverage of Save Glebe Farm
Stories from both local papers about Glebe Farm, featuring the objection by Cotswold Conservation Board and Save Glebe Farm's response to the developers' newsletter.

November 30th 2015 - Save Glebe Farm Questions Developers’ Claims of Supporting Local Community.
Analysis reveals that the town is likely to see little or no benefit from Glebe Farm development, while the developers would make up to £20 million.

November 19th 2015 - Stroud District Council vote unanimously to adopt Local Plan, with immediate effect.
At an Extraordinary General Meeting on 19th November SDC accepted the Inspector's recommended changes to the Local Plan and voted to adopt it immediately.  The Plan sets out housing growth of c.100 homes for Minchinhampton Parish, with development focused on brownfield sites in the Stroud Valley area.  It explicitly recognises the need to protect greenfield sites in the AONB that are vital for the health of Minchinhampton and Rodborough Commons.

October 25th 2015 - New Action Group formed to oppose Glebe Farm development.
Following the developers' presentation to Minchinhampton Parish Council and a public meeting earlier in October, Save Glebe Farm has come together to oppose the proposals for Tobacconist Farm and Glebe Farm under the Protect Our Space banner.

September 14th 2015 - Minchinhampton Parish Council objects to Well Hill development.
At a packed Council Meeting, the Parish Council voted by 7 votes to 0, with 3 abstentions, to object to the Well Hill development, because the site lies outside the settlement boundary and because the National Planning Policy Framework dictates that great weight should be given to conserving landscape and scenic beauty in Areas of Outstanding Natural Beauty.  This mirrors the grounds for objection given by the Cotswold Conservation Board.

August 27th 2015 - Developers launch appeal for 100 house development on Rodborough Fields.
Developers who were refused planning permission to build up to 100 homes on Rodborough Fields have launched an appeal to the Secretary of State more than two years since the application was made.  Planning officers at Stroud District Council refused the proposal by Lioncourt Homes in November 2013 due to concerns about ecology, surrounding wildlife and the impact on the AONB.

July 30th 2015 - Councillors agree increase of 200 new homes in Stroud District Local Plan draft.
“The local plan inspector has confirmed that he is broadly happy with the housing numbers in our plan, which is very positive and allows us to move forward with public consultation on the proposed modifications."
“Using this recommended housing target, we currently have more than seven years supply of housing land in the district and this will help us fight off predatory developments in the area.”
Councillor Geoff Wheeler, Stroud District Council

July 18th 2015 - Developers unveil plans for 150 houses and doctors surgery at Glebe Farm in Minchinhampton.
Stroud News and Journal piece about the Glebe Farm consultation, including quote from Protect Our Space urging public consultation through a Neighbourhood Plan.

July 10th 2015 - Latest NDP News from Minchinhampton Parish Council.
The Parish Council newsletter heavily features the Council's consideration of a Neighbourhood Development Plan and the GRCC presentation on 1st June.  Reproduced on our website at the foot of the NDP page.

July 10th 2015 - Housing boost for brownfield sites.
BBC News: automatic planning permission would be granted on many brownfield sites in England in an attempt to boost house-building, under government plans. Ministers would also get powers to seize disused land, while major housing projects could be fast-tracked, and rules on extensions in London relaxed. Chancellor George Osborne said reforms were needed because Britain had been "incapable of building enough homes".

July 3rd 2015 - Planning application for 4 houses on private land in Tetbury St., outside the settlement boundary.
Enter "1519" in Search Criteria to see details of the planning application for 4 houses within the grounds of Croeso, on Tetbury St., opposite Tobacconist Rd. and the major development proposed by Redrow Homes and Archstone.  You can see the plans here.  This proposal was rejected in 2013 because most of the development lies outside the settlement boundary.

June 18th 2015 - Door to door leaflets announce consultation on development of Glebe Farm.
A public consultation for a major development at Glebe Farm in Minchinhampton is took place at The Hub on July 1st, between 2pm and 8pm, hosted by Archstone and Redrow Homes

June 11th 2015 - Relief as 188-home Berkeley development is rejected by committee.
News story about controversial plans for a 188-home development on green fields in Berkeley, rejected after a tense two-hour council debate.  The application by Charles Church Development Ltd was turned down after a two hour debate at the June meeting of Stroud District Council’s development control committee.

June 8th 2015 - Housing Blight?  With the urgent need for more housing, Britain's planning laws are under pressure like never before.
Greenbelt land and even sites designated as Areas of Outstanding Natural Beauty, are being earmarked for development. So how far can we protect the countryside when the need for houses is so acute? Allan Urry reveals new figures on scale of the problem and investigates claims that the planning system is being stretched to breaking point.  File on Four, Radio 4.

May 29th 2015 - Campaigners and developers go to war over controversial Minchinhampton housing development.
Stroud News and Journal story on our exchange of open letters with the developers over the timing of their planning application.  Developers say they are applying two and a half years before they can build so that they can plant trees for their "Minch Orchard project" and donate £50,000 to Minchinhampton School.  We say it is not in the community's interest to apply so early, when a local planning framework is around the corner.  We also point out that the financial contribution to the school may be welcome but is a private matter and not a part of the planning process.

May 22nd 2015 - Campaigners call on village housing developer to hold fire.
Stroud Life piece on our open letter to the developers.

May 20th 2015 - Minchinhampton Parish Council Objection to the proposed Knapp Development.
Read the grounds for Minchinhampton Parish Council's objection to the proposed Knapp development: non-compliance with the Area of Natural Beauty on landscape grounds, outside the settlement boundary in the emerging Local Plan and access.  More on The Knapp here.

May 19th 2015 - Open Letter to Developers.
Read our open letter to the developers of the Well Hill Old Vineyard field, inviting them to confirm that they will await the implementation of a local planning policy framework before ,making their planning application.  We've also posted the developers' response, together with our perspective.

May 11th 2015 - Independent
An amazing story, in the national press, from another part of the country with a similar issue.  A farmer in Horsham has joined with locals to  fight proposals from a major developer which would value his land at £275m .  Locals say there is no infrastructure to support the development, they're miles from the nearest station and the land is prone to flooding.

May 6th 2015 - Stroud News and Journal.
An article about the formation of Protect Our Space, the accident on Well Hill and a further driving incident that was reported the same day.

April 30th 2015 - Stroud Life.
Article about an accident on Well Hill in which five cars and two houses were damaged and about the formation of Protect Our Space.

April 5th 2015 - Sunday Times.
A light-hearted look at the state of the planning process today, explains the national and local planning frameworks, plus how and how not to register an objection.

January, 2015 - The National Trust.
This National Trust article is about the flaw in the Government’s planning rules which has opened the door to streetwise developers, who are undermining the local planning process and bypassing local opinion.

April 22nd, 2014 - Guardian.
Why the nimbys are winning the UK's housing battles.  Guardian article by an independent housing consultant argues that action groups of well-heeled locals are blocking development, acting against the needs of the homeless, badly homed and "most deprived."

June 2011 - Gov.uk
A reminder of what is possible.  This is a news release from the Natural Environment White Paper, published in 2011, which included proposals to give communities new powers to designate protected green areas as part of local neighbourhood plans. 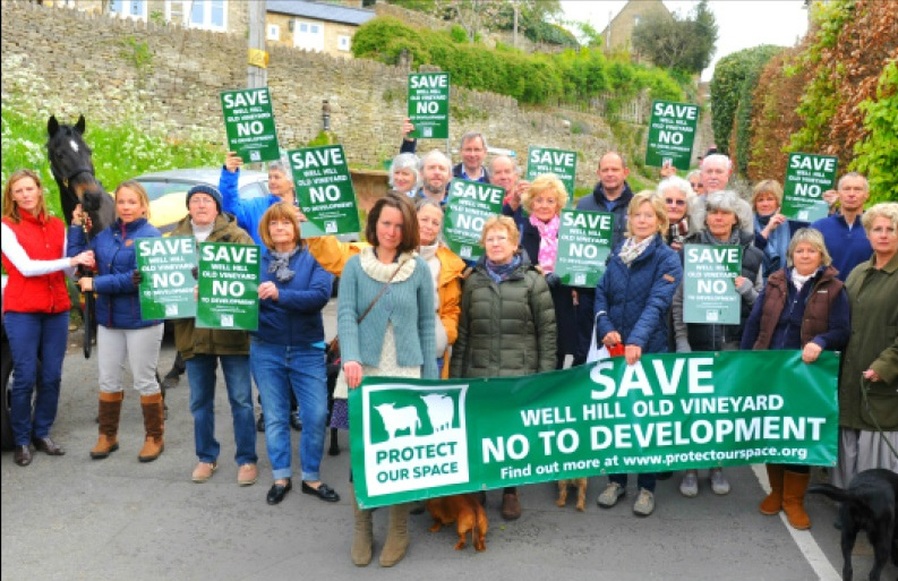